The Moon Is Always Full 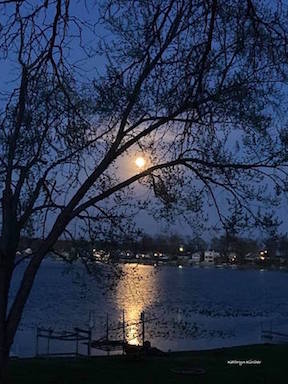 You and I are walking on a cloudless, summer night along a quiet lakeshore and look up to see a crescent moon. “Oh, look at the full moon!” I exclaim.

You correct me (or just think I’m crazy). “No, that’s a crescent moon, silly!”

I counter, “No, the moon is always full! It’s just our earth’s perception of the moon at this time that makes it APPEAR crescent.”

“Oooo, aren’t you the wise one!” you tease as we continue our moonlit walk.

Have you ever considered that God, the Creator of the moon, is always “full”? It’s just our perception of Him from where we’re standing that makes Him appear less than that. We would be wise to learn His true nature and character so that when we only see part of Him—which is most of the time—we would understand who He really is. The Scriptures tell us God is like this: He is love. He is good—there is no malice or ill will in Him towards us. He is faithful. He is true. He is kind. He is unchanging. He is our Father. And in His fullness, He has many other attributes.

Every day, we need to recalibrate our thoughts to this understanding because our experiences in this world may lie to us and tell us otherwise…that sometimes, He is malicious. Sometimes, He is capricious. Or sometimes, He misleads us. If this were true, then He would be a “crescent God” so to speak, not really full of goodness and light, and we wouldn’t trust Him.

To complicate matters, we were born into a war here on earth, and there is someone who really IS full of evil. He was cast out of heaven along with many others, and his major work on earth is to lie about God’s true nature and character. He sends his minions to try to get us to believe these distortions. He is the devil, the father of all lies. But once we know the truth about God and understand that His Son, Jesus Christ, is the exact representation of the Father, we can begin to trust that He is always “full”… not just in good times when we see His fullness but in hard times as well.

“Wow, I never thought of it that way,” you whisper as we round the bend towards home.

“For since the creation of the world God’s invisible qualities–his eternal power and divine nature–have been clearly seen, being understood from what has been made, so that people are without excuse” (Romans 1:20 NIV).

“But in these last days He has spoken to us by His Son, whom He appointed heir of all things, and through whom He made the universe. The Son is the radiance of God’s glory and the exact representation of His nature, upholding all things by His powerful word. (Hebrews 1:2,3a Berean Study Bible).