Tear Down This Temple – Week 3 of Lent 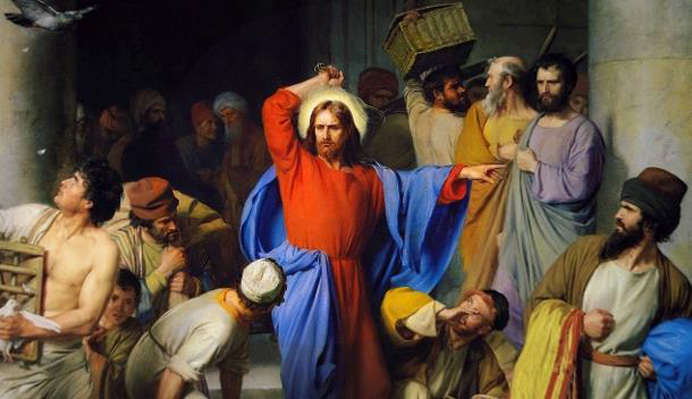 John 2 – 13 The Passover of the Jews was at hand, and Jesus went up to Jerusalem. 14 In the temple he found those who were selling oxen and sheep and pigeons, and the money-changers sitting there. 15 And making a whip of cords, he drove them all out of the temple, with the sheep and oxen. And he poured out the coins of the money-changers and overturned their tables. 16 And he told those who sold the pigeons, “Take these things away; do not make my Father’s house a house of trade.” 17 His disciples remembered that it was written, “Zeal for your house will consume me.” 18 So the Jews said to him, “What sign do you show us for doing these things?” 19 Jesus answered them, “Destroy this temple, and in three days I will raise it up.” 20 The Jews then said, “It has taken forty-six years to build this temple,[c] and will you raise it up in three days?” 21 But he was speaking about the temple of his body. 22 When therefore he was raised from the dead, his disciples remembered that he had said this, and they believed the Scripture and the word that Jesus had spoken.

Now we as a part of his body are temples unto him. He dwells within us. He is the same yesterday today and forever. When we read this passage, it is wise to ask ourselves these simple yet complex questions. The answers will be different for each of us. However they could profoundly change our relationship with Him.

Father, today I am asking you to show me where I need to allow you to change my heart. I am asking you to drive out my selfish desires and replace them with the desires of Your heart. Help me to get past the “give me my will” so that I can better see Your will. Help me to honor Your Name with the life I live. Father, today I give you permission to drive out those things that are not pleasing to you. I ask these things in the name of Jesus. Amen (so be it).