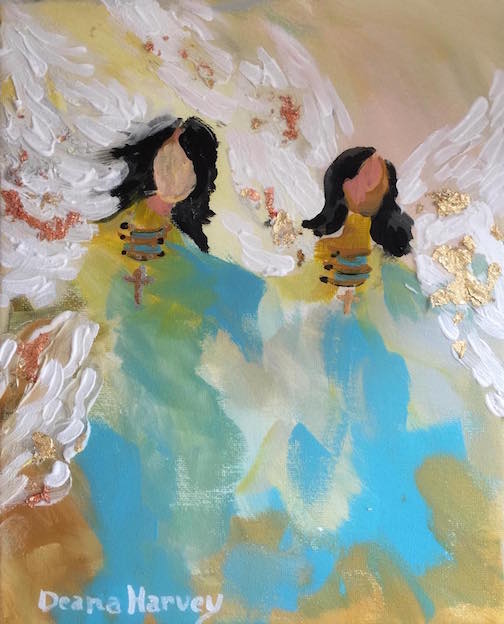 Bang! Bang! Bang!  The loud noise startled Alisa, who was working the drive-through window at a local sandwich shop.  She walked out to see what caused the noise.  It was a police officer, standing at the locked door.

Until that moment, it was just another snowy Indiana night, but then the officer told Alisa and her coworkers of a shooting that had just taken place one block away, and their whole evening took a drastic turn.  Shortly thereafter, a second officer came to inform them that the Crisis Team would soon be surrounding their building, blocking all entrances, because the suspected shooter was holed up in a house just two doors down the street!  He informed them that they should immediately close up shop and go home to safety.

When my daughter arrived home almost six hours early, I wondered what was going on.  Her face was flushed, and her voice was heightened in pitch and intensity as she told the tale.  As Alisa spoke excitedly, my heart began to race.  Images of a hundred bad endings to this story flooded my mind, and fear pierced my heart like a dagger.  Almost immediately, the Lord gave me a mental picture of the policemen surrounding her building and leading them to safety.  I heard in my mind, “The angel of the Lord encamps around those who fear Him, and rescues them.”  Immediately, the frightening images vanished, and my heartbeat slowed to a normal pace, the sting of fear gone from my heart.

Whether an unstable government, persecution, life-threatening illness, natural disasters, or the loss of a job, we all face situations that threaten to plunge us into fear, panic, or worry.  As believers, however, we can choose to listen to the Holy Spirit, focusing on the truths found in the Scriptures, bypassing those pitfalls.

Here are a few of the verses the Lord has given me over the years during dangerous, fearful situations:

“I have told you these things, so that in me you may have peace.  In this world you will have trouble.  But take heart!  I have overcome the world” (John 16:33 NIV).

“The angel of the Lord encamps around those who fear Him, and rescues them” (Psalm 34:7 NASB).

What are some of the verses the Lord has given you in similar situations?

PRAYER:  Father, in the midst of our trials remind us that You will never leave us.  In dangerous times, You send Your angels to protect us.  Give us Your peace, and show us how to walk in victory over fear, panic, and worry.