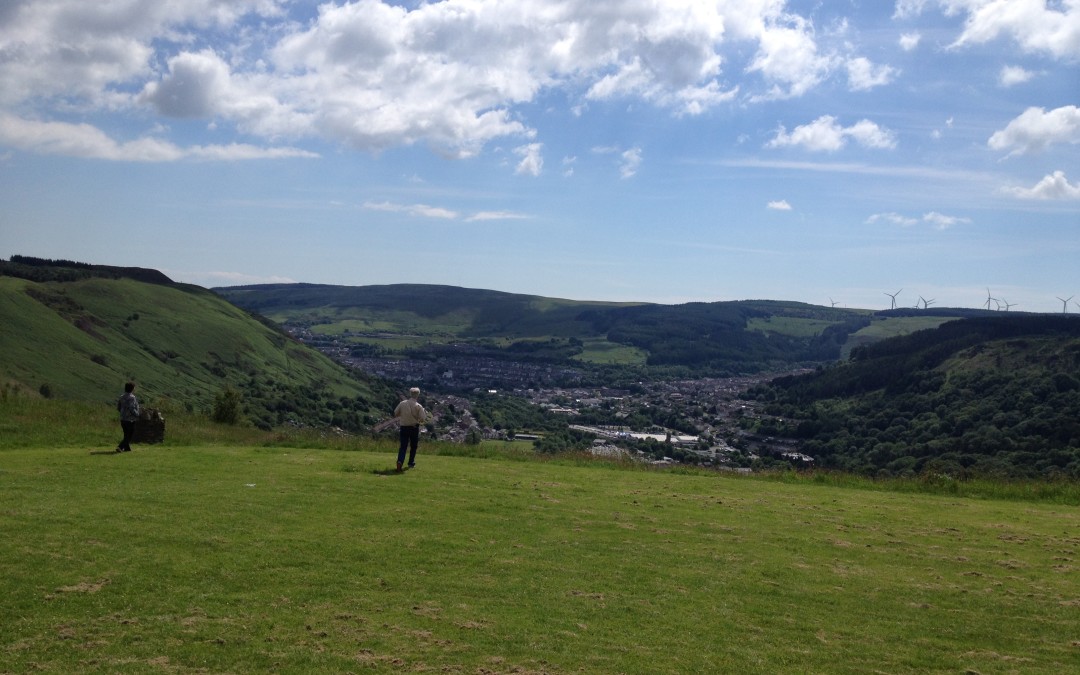 Is it possible to experience within the course of one day, a microcosm of an entire lifetime of walking with God?  That is what seemingly occurred on Tuesday, June 23, 2015.  From the depths of the earth at the Big Pit National Coal Museum in Blaenavon to the heights of the mountaintop at Penrhys situated at 1,100 feet above sea level and overlooking the Rhondda Valleys, the day symbolically held both the depths and the heights of the Christian life.

If you have walked with God any length of time, you know there are seasons of darkness, pitch black darkness, where you can’t see even an inch in front of you and hopelessness threatens to overtake.  You also know there are heights in God where His presence seems so close, so real, you can almost see and feel Him.  Both are part and parcel of our living, breathing relationship with God.  One develops trust and faith where our roots are sunk deep into God’s character and nature.  The other gives us an appetite for all heaven-born things, especially God’s presence, and a desire to bring it to earth.

So we began our day 300 feet underground in The Big Pit on a tour with a former coal miner and saw what life was like for the thousands of men who labored in the coal mines.  A working coal mine from 1860 to 1980, Big Pit is now open to the public under the auspices of the National Museum of Wales.  The site is dedicated to the operational preservation of the Welsh heritage of coal mining, which took place during the Industrial Revolution.  When the Revival of 1904-1905 hit Wales, the coal miners in the Rhondda Valley were especially impacted.  We wanted to see for ourselves just a little of what it was like underground in the mines.  Big Pit is no “Disney-style” theme park but what was once a real, operational coal mine.

Excited and a bit jittery, we donned hard hats with safety lamps and waist belts with a battery, which weighed about 11 pounds.  Before taking the underground tour, anything containing a dry cell battery from watches to cell phones had to be surrendered and left behind because if there was firedamp about, they could start a fire or explosion.  Entering a large cage, we were lowered 300 feet down the Big Pit mineshaft for our underground tour, a captivating journey around a section of original underground workings.

Our tour guide put us at ease with his playful sense of humor combined with his warm heart and obvious experience with coal mining.  He carried the most commonly recognized symbol of the coal industry, the flame safety lamp.  Painting a picture of how difficult a life this was for the local men, our guide informed us that boys started working in mines even at the age of six.  As we learned earlier, Evan Roberts, the revivalist, and Rees Howells, the intercessor, both began working in coal mines at the ages of 11 and 12, respectively.

The air was damp and cold.  The ground under our feet was hewn roughly and unevenly.  The only light visible came from our cap lamps and the safety lamp, which our tour guide faithfully carried.  We saw the stables where the pit ponies, who worked in the mines, were kept and learned that often once the ponies were lowered underground, they never saw the light of day again.

At one point, our tour guide instructed us all to turn off our cap lamps simultaneously, and we were plunged into utter darkness.  We stood in it for a time, and we realized just how black total darkness is.  For those who mined, every day was an endless night.  Mining meant going to work before daylight to descend into even deeper darkness and along with it, the constant danger and hard manual labor, and then emerging, at the end of the day, to greet more darkness as the sun had already set.  How well this demonstrated to me “the dark night of the soul,” which most Christians experience at least once, if not several times, in their walk with God!  “The people who walk in darkness will see a great light; Those who live in a dark land, the light will shine on them” (Isaiah 9:2) was exemplified as we turned our cap lights back on.  The teasing and playful banter between the tour guide and our team took the edge off the sobriety of the moment.

Back at the surface with sunlight engulfing us, we enjoyed a brief lunch in the museum’s cafeteria.  Larry and I enjoyed hearty bowls of Welsh cawl (soup) filled with lamb, potatoes, carrots, and leeks.  Cawl, pronounced to rhyme with owl, is a one-pot dish considered by many to be the national dish of Wales.  Unlike many cuisines, which have their roots in the food of the aristocracy, Welsh food was developed to sustain working men and women using only what the land could offer.

Fueled by our tasty lunch, we headed for our next stop, St Mary’s Well near Penrhys, which overlooks both valleys of Rhondda Fawr and Rhondda Fach.  Until the late 16th century, it was one of the holiest sites for Christian pilgrims in Wales.  The statue of Our Lady of Penrhys, near the medieval holy well, dominates the skyline which marks the site of an ancient chapel.  The purpose of our stop here was to pray over the Rhondda Valleys, where the Revival of 1904-1905 was particularly strong.

Climbing out of our three vehicles, which our team traveled in, we spread out over the lush green hillside.  Looking over the village below us, we began to pray as we stretched out our hands to the valley.  The wind blew strong that day as we prayed for revival to be poured out on the Rhondda Valleys again and in particular that young people would be saved, lives transformed, and hope brought to the people once again.  This was another one of the “thin places” we experienced in Wales, where heaven seemed to kiss earth, and we were caught up in the embrace.  One of my favorite photos of our team was taken here.

We made the steep decline to St Mary’s Well, an ancient healing well whose waters were believed to have the ability to cure ailments.  A vaulted stone building was built around the well which, although heavily restored, still exists today.  The structure over the well is entirely built of local sandstone, with one side built into the sloping hillside.  Unfortunately, due to vandalism, the structure was surrounded by a padlocked iron gate making it impossible to go inside.  However, there was an area outside the stone building, where water from the well flowed.

We made a couple more stops in the Rhondda Valleys, and the sheer beauty of this area overwhelmed us with the villages closely enveloped by steep-sided forests and heather-clad hills often filled with the pink flower spikes of wild Foxglove.  At one stop, we were surprised to find a number of sheep just standing around seemingly waiting for us to come.  “My sheep hear My voice, and I know them, and they follow Me (John10:27)” echoed in my mind as we left the Rhondda Valleys, which held for us both the express image of deep underground darkness, as well as the exhilaration of the mountaintop heights.

“In his hand are the depths of the earth; the heights of the mountains are his also.” ~ Psalm 95:4