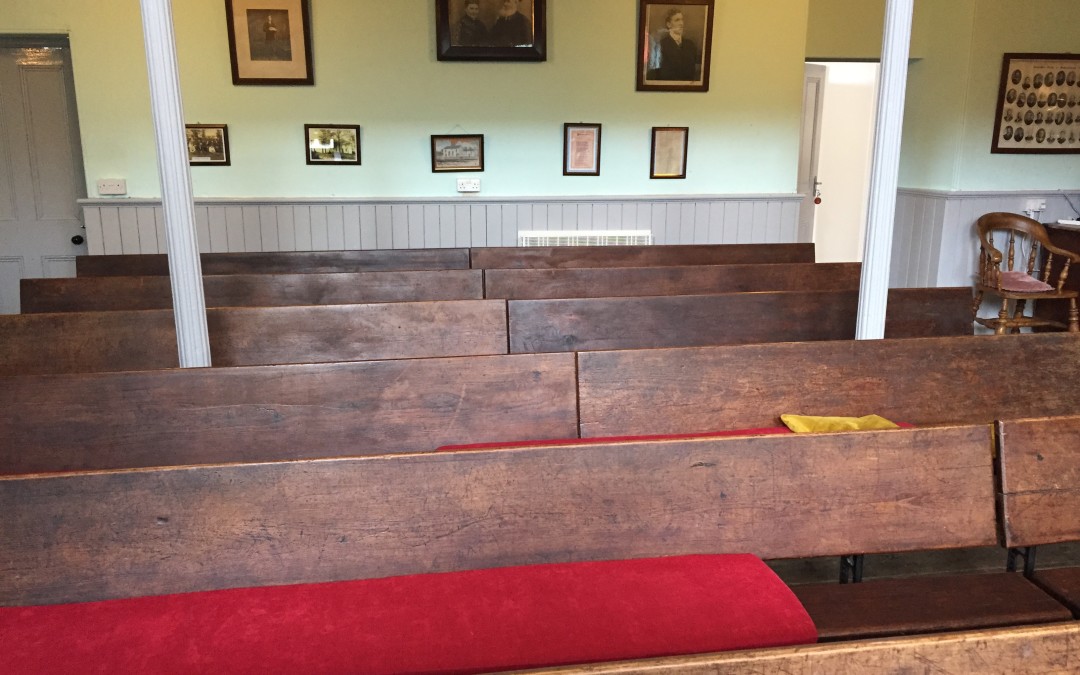 Perhaps one of our most anticipated stops was Moriah Chapel in Loughor, known as the birthplace of the great Welsh Revival of 1904-1905.  Over the course of the past 111 years, thousands have made Moriah Chapel a place of pilgrimage, and now Team Heartland would tour and privately pray in this revered place.  We were reminded what we did on this mission in private was as important as what we did in public.

First, we entered the schoolroom of Moriah Chapel, which was built in 1842.  It was interesting to note the date stone at the back of the schoolroom and to see the name of the chapel in those days, Moria, did not have a “h” at the end.  Looking down at the thick, wooden floors as we passed through the door, I was impressed by the aging planks and couldn’t help but think of the thousands and thousands of people who have trekked over this narrow threshold on these same wood floors.  In and out, in and out, over the years their feet carried them in search of the fire of the Holy Spirit.  The schoolroom had a gallery that was added to the building in 1849.  Closing my eyes, I could imagine the men, women, and children seated up there as the lower level was packed to capacity.  The schoolroom still housed the long wooden pews, now deeply scarred, on which we sat as we listened to the curator and tour guide, Mr. Ebenezer, who was helpful and informative as he gave a descriptive history of Moriah Chapel.

Commencing on October 31, 1904, a series of prayer meetings was held at Moriah Chapel in which Evan Roberts made urgent appeals to the people to stand and confess Christ publicly.  Each night the presence of the Holy Spirit became more powerful, and many people confessed Jesus Christ as their Savior.  On a Sunday night, November 6, during a prayer meeting, Mr. Roberts instructed everyone to pray the same prayer, “Send the Holy Spirit now for Jesus Christ’s sake.”  The Holy Spirit descended with great fire upon the people present, and they prayed until the early hours of the morning.  Night after night, Moriah was crowded to capacity, and the services continued until 4:00 and 5:00 in the morning.

The Revival spread like wildfire from place to place all over the nation of Wales.  The presence of the Holy Spirit in a meeting did not depend upon Evan Roberts being there.  The Holy Spirit descended even on places where Evan did not visit.  Society was changed, as Wales became a God-fearing nation.  Although it was a little known country when the 1904 Revival began, within a short time people were flocking to see and hear for themselves what God was doing and to share in the blessing.  Newspaper reports of the Revival spread the news of the awakening, and visitors touched by the Spirit of God took the flame to their home countries. The Revival spread to Europe first, then America, and eventually to all five continents.  Now history records this as possibly one of the greatest revivals of all time, as no revival has changed a whole nation in such a short period of time and then gone on to impact the rest of the world.

As I heard the story and looked around at the humble surroundings, I was overwhelmed with the emptiness of the place, as it now seemed more like a museum and monument to what once was.  Memorabilia were scattered throughout the schoolroom that told of Evan Roberts’ life and the history of the Revival.  But now churches throughout Wales are closed, and pulpits are empty.  Many Welsh Christians, as well as others around the world, are seeking God for a fresh revival, one that surpasses even this one.  One that reaches every soul, in every nation, on every continent.

Joined by Welsh revival historian, David Pike, we were just a small band of twelve; what difference could we make?  As we turned our eyes away from ourselves, we began to quietly worship and pray in this place with only the accompaniment of a guitar and violin.  Softly, we sang as Dave and Emma played, “Send the Spirit now, send the Spirit more powerfully now, still more powerfully now…” as Evan Roberts had led the congregants in prayer that Sunday night so long ago.  “Let the ancient wells be opened!” we cried.  One of our pastoral team members, Carolyn, was burdened for the lack of men and women to fill the pulpits of Wales.  We prayed and called them forth.  As we exited the building, we knew we had left a “stack of wood,” as so many others before us had done, upon the altar of prayer.  Lord, send the fire!

Outside we encountered a gate with the words in English:  “Persons entering this graveyard, do so at their own risk.”  Yikes!  But Mr. Ebenezer reassuringly led us through the gates to the church cemetery that included the family burial ground of Evan Roberts.  In his thick Welsh accent, our gracious, gray-haired tour guide continued to amaze us with details of the Roberts family and the property we stood upon.

Lastly, we entered the main chapel, which was built in 1898, just six years before the Revival.  Evan Roberts and his parents were members of this chapel.  Back in Roberts’ day, families had to rent their pews.  Each pew was numbered, and if you didn’t have a pew rented, you had to sit in the balcony.  Mr. Ebenezer showed us an actual record book that contained the names of church families and their pew numbers.  Our team members ascended the pulpit area for a photograph before we left the chapel.

Outside in front of the chapel, we viewed the memorial column to Evan Roberts, the revivalist.  It was erected in 1953 in preparation for the fiftieth anniversary of the Revival in 1954.  The words on the front of the memorial are in Welsh, but etched on the back were some words in English, a transcript of Evan’s own handwriting, speaking to us today like a personal benediction and exhortation as we left:

Dear Friend,
God loves you.  Therefore, seek Him diligently, pray to Him earnestly.  Read His Word constantly.
Yours in the Gospel,
Evan Roberts