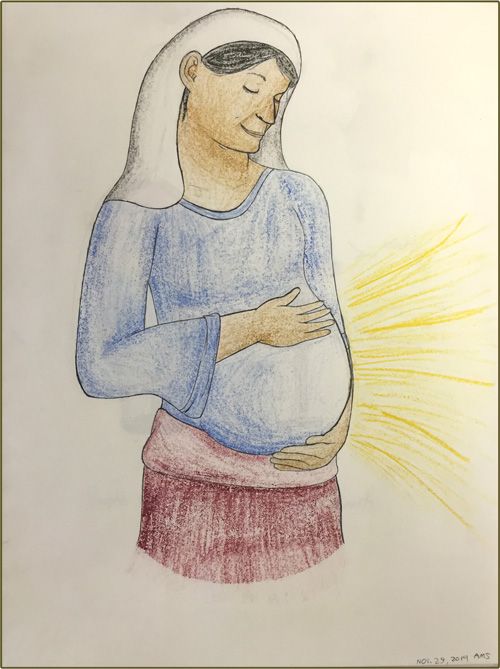 How bewildered Mary must have been. She was so young! She was betrothed to Joseph, but not yet married, when the angel appeared to her with the stunning news that she was favored of God and would bear the Messiah prophesied about for so long.
Yet in spite of her bewilderment, Mary responded by proclaiming, “Behold the bond-slave of the Lord; let it be done to me according to your word.”

Still, she was undoubtedly frightened and confused. Scripture tells us that she soon went “with haste” to visit her elderly relative Elizabeth, who was (by another miracle of God) pregnant as well. They shared their wondrous stories. Elizabeth’s baby, John [the Baptist], leaped in her womb at the sound of Mary’s voice, and Elizabeth was filled with the Holy Spirit. Mary praised God as well: “My soul exalts the Lord, and my spirit has rejoiced in God my savior.”

As Mary’s time drew near, she and Joseph were forced, in spite of her imminent confinement, to obey Caesar’s edict to be counted in the census. They had to travel to Bethlehem, because he was “of the house and family of David.”

Imagine the fears Mary must have battled as her labor began. She was far away from home, she had never birthed a child, and she had no mother or midwife to help. We know the story. There was no room in the inn… the baby was born in a stable… his first bed was a feeding trough used by the animals.

We also know about the shepherds visiting, the angels singing, and the wise men’s gifts to Jesus. Luke 2, verse 19, tells us that “Mary treasured up all these things, pondering them in her heart.”

In our reflections during this Advent season of 2014, it would be good for us to ponder the following questions: are we able to treasure up the ways that God chooses to use us, regardless of the circumstances? Can we see past the mundane to the miraculous? Will we allow God to help us look beyond our fears with faith? If our answers are yes, we’ll be able to say, as Mary did, “Behold the bond-slave of the Lord; let it be done to me according to your word.”

Told by an Angel,
the future of her child.
The Virgin Mary
answered with faith.

She who did not doubt
the messenger of God,
bore the Son of God.

Emmanuel.
God with us.