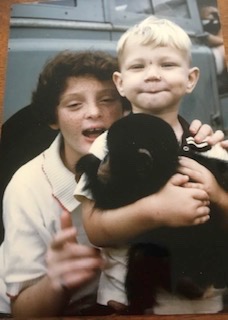 See that 10-yr-old girl with the toddler and his chimp? There were other kids her own age to play with, but she never really felt part of that group. Then there was Bruce, the rambunctious toddler. He didn’t have anybody his age to play with. His parents were busy being missionaries, and the girl was one of the kids at the boarding school where they all lived and worked. The girl and the toddler became friends; they needed each other.

Missionaries become like family while serving overseas. The kids usually call the adults aunt or uncle with a few exceptions for teachers and doctors. But the sense of family often remains even after decades have gone by. In this case, the girl still calls Bruce’s parents aunt and uncle.

Recently, the girl received an email containing this picture from the aunt. But the girl had no recollection of the picture being taken or of that day and barely any memory of Bruce. But his mom remembered how helpful the 10-year-old girl had been and the kindness she had shown the busy little guy. And now, more than 50 years later, Bruce’s mom, from her own wellspring of gratitude, said thank you once again. And the girl’s heart was touched, warmed, and encouraged. She had been given an unexpected blessing for something freely given and long forgotten.

It’s an example of the principles of sowing and reaping, giving and receiving, and blessing and thankfulness. (Or is it thankfulness and then blessing?) Either way, be willing to give and invest however you can, how much you can, and whenever you can regardless of your age or situation. And someday, in someway, in God’s good time, you will receive a bountiful return.

“Give, and it will be given to you. A good portion—packed down, firmly shaken, and overflowing—will fall into your lap. The portion you give will determine the portion you receive in return.” (Luke 6:38 CEB)

By the way, if you haven’t figured it out or couldn’t tell by looking, that girl was me.