It Is Christ Who Crowns You 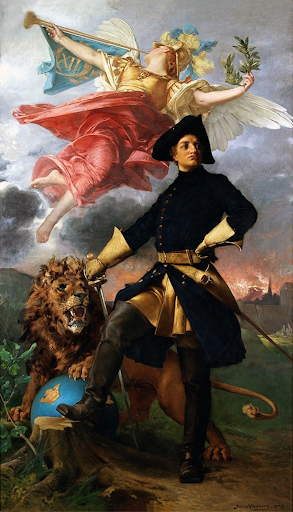 “When the angel of the Lord appeared to Gideon, he said, ‘The Lord is with you, mighty warrior’” Judges 6:12 (NIV).

The year is 1697. Inside a vast hall, the assembled crowd of statesmen watch in anticipation as a 15-year-old boy steps toward the archbishop and the crown. His name is Charles the XII, and he’s not supposed to be here. His father’s deathbed instructions left a council of regents in charge of Sweden for the next five years. But his father isn’t the only one who doesn’t believe in him. The nobles in the crowd are no doubt smirking as their soon-to-be puppet ruler walks forward to become Sweden’s first absolute monarch. And there are agents in the crowd, preparing to report back to the other European powers that, yes, Sweden just put a teenager on the throne. Now is the time to strike and divide the land up like wolves devouring a lamb.

If you were in that crowd, you’d be hard pressed to find anyone who expected much from this boy. Except for one person: the boy himself. He walks to the throne and instead of waiting for the archbishop to crown him, he announces that he is made king not by the church but by God Himself, and as God’s representative, he places the crown on his own head.

As someone who’s heard God tell me who I am, I recognize that confidence. It’s an assurance that doesn’t come from any physical reality, and so it’s not subject to any physical reality. The assembled crowd probably wrote it off as the cockiness of a teenage boy. But they were soon proven wrong.

The history reads like something out of the book of Judges. Charles XII starts his reign by enacting reforms that prevent the nobility from exploiting their power and privilege, and when the people pour out their love in response, the nobles dare not oppose the king they themselves put on the throne.

Soon, the alliance of Denmark, Poland, and Russia launches their attack, and Charles finds himself in battle after battle in which he is outnumbered several times over by enemies in a better position. And yet, he achieves total victory in every fight. I pity the historian trying to explain these wins without mentioning the hand of God. They stumble over themselves trying to talk about how someone not old enough to shave can trump the greatest military commanders of his age, and the word “luck” gets used to the point where the entire field of probability just has to throw its hands up in frustration.

I’d like to say this history ends on a high note, but it doesn’t. In 1709, Charles is injured and his campaign ends in disgrace. He mounts another one only to die from a sniper’s bullet. I’ve long wondered how someone who walked so closely with God could fall to such disgrace. After much prayer and meditation, I believe I’ve come to an answer: Charles XII got so caught up with the people praising his name he got out of the habit of listening to who God said he was. And so he tried to accomplish things in his own strength, with predictable results.

Prayer: God, tell me who I am to You. Because Yours is the voice of Truth. If the world had to exist just because You told it to, then what can keep me from being who You call me to be? Grant me the humility to accept it, and Your strength to fulfill it.

Song: “Remind Me Who I Am” by Jason Gray https://www.youtube.com/watch?v=QSIVjjY8Ou8

Want to know more? Extra Credits has an amazing series on YouTube on Charles XII.