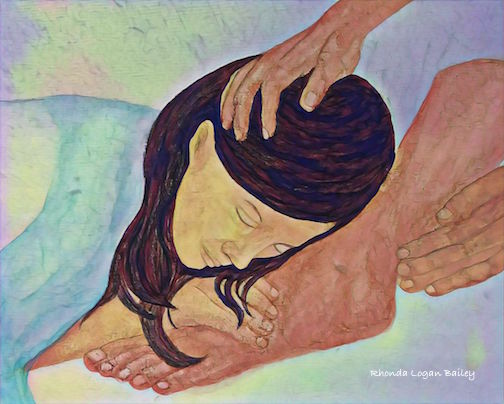 Awakened by the gentle stirrings of wind and light chasing away the darkness, Mary solemnly rose, washed her hands and face, and then gathered the necessary items. Covering her head, she began the trek to the tomb with sorrowful steps and heavy-hearted silence. As she walked along, she recalled the state of her soul before He called her by name and the transformation she had experienced as one of His followers. These memories only heightened her sense of immense loss.

Upon arriving, she was met with sights beyond any logical explanation. The stone had been rolled aside, and the tomb was empty. Except for the linens that had three days earlier covered the body of the one who had rescued and redeemed her, the one she believed was the Holy Messiah, The Son of God.

She stood in stunned confusion as a bright light burst forth, seemingly composed of thousands of diamonds that illuminated the tomb and then transformed into two angels, cloaked in white and continuing to sparkle from the brilliant light emanating from within. Falling to her knees in reverence, she began absorbing that all He had taught her was undeniably true. One of the angels asked, “Why do you look for the Living One in a tomb? He is not here, for He has risen, just as He told you.”

The words reverberated through her, revealing a new layer of truth. Mary began to understand that He had been preparing her all along for this moment. The angels motioned for her to arise and gestured toward the entrance. Astonished, she stood up, regained her balance, and stared at the scene before her. In obedience, she exited through the opening and into the golden glow of early morning. After taking a few steps, Mary returned her gaze to the tomb, but it was once again filled only with darkness.

As she looked through her tears, she walked carefully, trying to make sense of all that had occurred. From behind her, a man’s voice startled her saying, “Woman, why are you weeping? Who are you looking for?” When she turned to answer, the sunlight blinded her, and she could only see the silhouette of a man whom she assumed was the gardener. Without hesitation, she pleaded, “Sir, if you have carried Him away, tell me where you have laid Him, and I will take Him away.” He took a step closer to her and spoke her name. Her heart skipped a beat for she knew this distinctive voice. It was the same one that had called her into wholeness and welcomed her as a follower and a friend. She nervously uttered, “Rabbi?”

Then upon seeing Him more clearly, Mary dropped to her knees, clutched His ankles, and kissed the wounds on His feet. Overwhelmed, she began releasing tears of intense joy and relief. Jesus rested His hand upon her head. She was instantly filled with His peace, and her senses were restored through His love. As she rose to her feet, He instructed her to go and without fear, tell the others. She did not want to leave Him, but she trusted His reassurance. She turned and began running, her excitement growing with each footfall.

Upon reaching her destination, she knocked frantically on the locked door, crying out repeatedly, “Let me in! Let me in!” Peter, recognizing her voice, paused in his grief to open it. Practically knocking him over as she entered, she spilled out her story. They were mesmerized by the words and yet unable to comprehend the meaning. She kept exclaiming, “It’s true! It’s true! He has risen! Indeed, He lives!!! I have seen Him with my own eyes and heard Him speak with my own ears!”

Peter made sense of the news first. He jumped to his feet and ran out the door with everyone else following quickly at his heels. Although John reached the tomb first, Peter was the first to go in. Indeed, they found it empty, except for the linen that had wrapped the body of Jesus. Confused, he slowly turned and was walking away when the others caught up. Peter sat down across from the tomb as the others took turns peering inside to see only the folded linen and empty space. Upon joining him, they paused in silent amazement, struck with awe and wonder, a swirling mixture of miracles and confusion.

They did not linger long at the tomb, fearing false accusations by the authorities should they be discovered in the vicinity. Peter cautioned them to remain silent as they went back to the upper room, even convincing them to split up and travel separately, so as not to attract any unwanted attention. Captivated by their own thoughts and trying to conceal their emotions, they carefully traversed through the city’s streets. One by one, they returned to where they had all gathered so many times to listen to Jesus and discuss His teachings.

The fireplace housed only a few burning coals, the doors and shutters were closed, so they remained in darkness for about an hour. The womb-like atmosphere seemed to add comfort to their thoughts. Thaddeus was the first to break the silence with an audible shiver as he stirred the embers and added some wood. Others then began lighting lamps, and the women moved amongst them, gathering items to prepare a meal.

Suddenly, they all began talking at once, echoing each other’s concerns and sharing their thoughts. The confusion continued to intensify, so the women began recruiting the men to help in the preparations, and this helped to calm the chaos. By the time the meal was prepared, order was once again restored, and they gathered around the table to give thanks. They sat together for a very long time eating and drinking, continuing to share their ideas and organize their understanding, desperate to make sense of all that had transpired.

Without a sound, Jesus appeared before them and said, “Peace to you!” Instantly, they calmed. “Just as the Father has sent me, I am now sending you.” Then taking a deep breath, He blew on them and said, “Receive the Holy Spirit. I send you to preach the forgiveness of sins, and people’s sins will be forgiven.”

And so it began… Indeed!