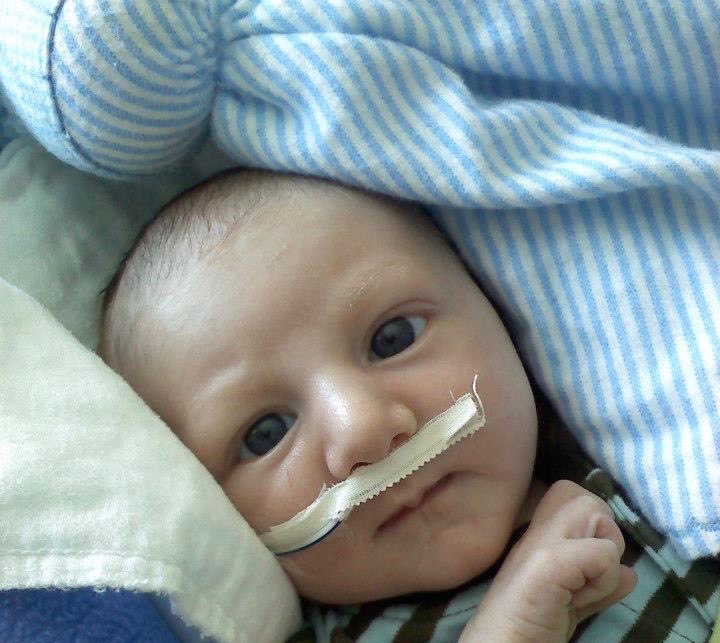 (As told to Cathy Schrock by Jill Haskins)

“Forget You, God!” Jill shouted as she threw the pillows, one after another, across the room with all her might.  “Forget You, God!  I HATE You!!”  The pillows hit the basement wall, no damage inflicted and no sound produced to alert anyone upstairs to what was happening – to know how she was truly feeling.

Hurt, loss, and anger had boiled over into rage in the past few weeks, and celebrating Thanksgiving with her extended family was like pouring salt into the wound.  She knew she had so much to be thankful for, but she wasn’t thankful.  She hated God, wanted nothing to do with Him, refusing to go to church or worship Him in any way.  What brought her to this point, bitter and angry toward God, dismissing Him from her life?

Joshua had been in the hospital for all 52 days of his young, newborn life. He was fighting to live, and Jill was exhausted.  She picked him up to quiet his fussing and as their eyes locked, he calmed down.  She prayed for mercy, asking God to spare her son, to repair his defective heart.  Then the machines’ blips, beeps, and monitor readouts changed, and she knew in her heart this was the end.  The medical staff came rushing in and asked her to leave the room, telling her to say goodbye to Joshua and advising her to call her husband. Within half an hour, she realized he was gone.

Aware that there was no one nearby, she felt arms around her, arms that hugged her tightly. There was a warmth emanating from her heart that permeated her body, and a physical calm that passed through her.  At the time, she didn’t understand this feeling of being held.  Now, as she looks back on the experience, she says that the embrace held her up and kept her from collapsing onto the floor.  It comforted her, letting her know she was not alone.  It was a bear hug that restrained her, as a toddler throwing a tantrum is restrained, preventing self-inflicted injury.  As she experienced this hug, Jill heard the words, “I Am Mercy.”  She knew that God was a merciful God, but He seemed to be saying something different to her in this encounter.  At that moment, He revealed His character to her.  “I knew that God was in this situation, and He would provide a way, even though it was going to be desperately difficult.”

The next hurdle: “How do I call my husband and tell him that Joshua is dead?”  Jill had no idea what to say to Shane, knowing he was at work and would have to make the two-hour drive to the hospital alone.  She opened her mouth and somehow the right words came tumbling out.  She believes it was the Holy Spirit speaking through her because at that traumatic moment, she had no words at all.  Jill explains it this way: “He took the helm of my ship and just did it.  Then I called my best friend to tell her what had transpired, and the same thing happened.  I was able to tell her ‘God is good; God granted mercy here today.’”  Jill says that in her heart she knows it was the Holy Spirit giving her those words, even though it took her a long time to fully grasp all their implications.

Over time, the bitterness of this incalculable loss overshadowed the experience of mercy and grace she had received in that moment of great distress.  Up to that point in her life, Jill viewed God as a “genie in a bottle,” of whom she could ask any favor and it would be granted.  When she begged God for mercy for Joshua, she was really asking God to heal him and make him whole here on earth, in this lifetime.  When God answered her prayer for mercy in His own way, healing Joshua and taking him to his eternal home, Jill had no framework to deal with the disappointment and loss she experienced.

The pillow-throwing incident in the basement on Thanksgiving Day was the boiling-over point for Jill’s anger and resentment.  She found herself traveling down a path of bitterness and rage.  Over time, however, she came to see that God’s definition of mercy, namely Joshua’s perfect healing and homegoing, was different from her definition of mercy.  She began walking down a new path — discovery of both herself and her God.  “I had to submit to God’s plan for Joshua and admit that God’s plan for him was so much better than mine,” Jill says now.  Her view of God has completely changed.  She realizes now that God’s goodness is more than a platitude.  It is REAL and it is greater than she can imagine.  “I learned that God’s ways are infinitely higher than our ways; He is compassionate in ways that don’t make sense to us.  He doesn’t just grant mercy, He IS mercy.”

In the time since Joshua’s death, Jill has been trained as a Biblical counselor.  In her own life, she has seen how broad God’s shoulders are and how well He deals with our anger.  She came to realize that God is unchanged by our anger and that He still loves us when we are expressing our hurt, anger, and disappointment to Him.  In her counseling, she shares with others that they shouldn’t be afraid of honesty with God. She says He urges her to keep expressing her anger as she works through it.  She tells her counselees of His great compassion for them and His great longing for them to experience healing.  She says God even showed her a vision of how many women He would touch through her story!  Jill says she still feels anger at times, but no longer does the anger control her or drive her away from God.  Instead, it draws her to Him.