Father’s Day at the Cardiff Vineyard 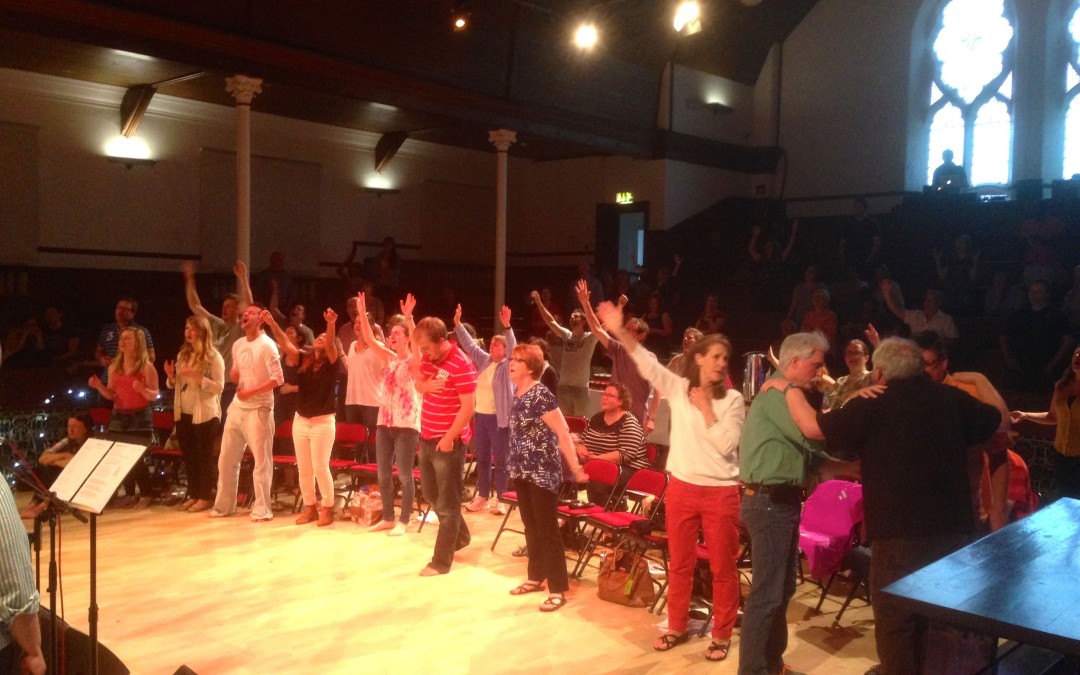 After our extended flight to Wales, we all welcomed a nap at our lodging place, the Ebenezer House at Hebron Hall Christian Centre in the small village of Dinas Powys, some four miles southwest of Cardiff.  Ebenezer House was perfect for our group as it contained eight bedrooms, three newly furnished shower rooms, a fully equipped kitchen, a comfortable lounge with large picture windows overlooking the countryside, and a dining/conference room.  The only downside was the lack of reliable Internet access at Ebenezer House although it could be obtained at the Main House.

Our gracious hosts, Gary and Lesley Smith, provided a lovely assortment of Cadbury chocolates and Welsh cakes, a traditional teatime snack in Wales, for our enjoyment upon our arrival.  The other married couple in our group, Pat and Marianne, had arrived ahead of us having toured in Scotland beforehand.  What a welcome sight they were when we arrived at our lodging place!  And they had taken the initiative to organize and grocery shop for us, as we were planning on preparing and eating many of our own meals there.

It was Father’s Day in the United States, a day that my husband and I had shared every year with our family since the birth of our first son in 1986.  This would be the first time we would not be together on this special day.  Just for fun, I had planned for our sons to share some answers to questions about their dad that would be given to Larry on this day.  However, these were in my suitcases, which had not yet arrived.  This would have to wait.

We were most excited about attending the Cardiff Vineyard on this night!  Larry and I were reminiscing about another Father’s Day.  It was 21 years earlier, 1994 to be exact, when we first stepped foot into a Vineyard Church.  This was in Kalamazoo, Michigan, but unbeknownst to us, a tremendous outpouring had occurred a few months prior in the Toronto Vineyard that was shaking not just the Vineyard Churches worldwide but many others as well.  It would go on to be  both hailed and criticized as The Toronto Blessing.  That Father’s Day in the Kalamazoo Vineyard we heard a notable university professor speak on the subject of past worldwide revivals, and we were impacted for life!  Little did we know 21 years to the date later, we would be in another Vineyard Church 4,000 miles away on a mission to help re-dig the wells of the great Welsh revival.  We were in awe of our God, who orchestrated this!

That evening our worship team combined with the worship team of the Cardiff Vineyard Church, which meets at The Gate Arts and Community Centre.  The Gate is housed in a former, 130-year-old Presbyterian Church, which was converted into a multipurpose arts centre.  From drama and dance, to music, concerts, theatre, and opera, The Gate promotes art in all its forms.  What a beautiful venue for a church!

The Heartland mission team of 11 consisted of five worship team members and six ministry team members.  Larry and I were on the ministry team.  As such, we would be available after the services to pray with people and minister in any way possible.  Here is a portion from Larry’s journal entry on that night:

“As a team, we spent some time in prayer before the service, and the Lord came and anointed us.  Worship was powerful and intimate.  We ministered to many precious people.  Many were touched by the power of God.  I gave a word that the Lord has a pleasant, open space for them from Psalm 16.  ‘The boundary lines have fallen for me in pleasant places; surely I have a delightful inheritance’ (Psalm 16:6).”  It seemed to us the Cardiff Vineyard Church has an incredible inheritance from the Lord from previous seeds that had been planted, some years ago and some recently, and in time they will reap it.

The following is a memory I have of that unforgettable night:  I was scanning the crowd of people looking for whom God would have me pray with.  My eyes landed upon a young man in his early 20s.  I approached him and asked if I could pray with him.  He agreed, and I proceeded to pray a general blessing upon him.  I told him that in the United States it was Father’s Day, and I would like to ask my husband, who could not be with his sons on this day, to pray a Father’s blessing on him, which Larry did.  Soon, I began to receive words of knowledge about his life specifically in regards to music.  I told him I believed God was going to use him especially in bringing jazz music into the church.  Later, he told us that he indeed was a jazz pianist and was desirous to be used by God, as he had just recently given his heart back to God after having been estranged from Him.  This was especially meaningful to Larry and me, as our youngest son is a jazz pianist.