Darkness to Light – Week 1 of Advent 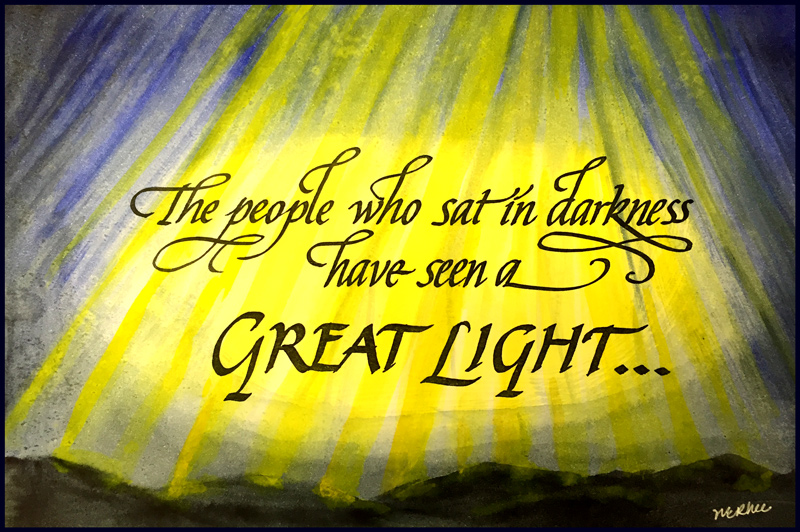 Sarah was excited. Her parents were going Christmas shopping, and for the first time ever they were leaving her home alone for the evening! It was about time, she thought. After all, she was twelve years old, almost thirteen.

She waited until they drove away and then sprang into action. Sarah didn’t like the dark, so she turned on all of the lights and cranked her music up to full volume. When her favorite song began, she danced her way through the living room, into the kitchen, and down the hall.

A long, hot shower was next on the schedule, after which she wrapped herself in her mom’s plush bathrobe. Reaching for the blow dryer, she anticipated a strong rush of hot air.

And that’s when it happened. When Sarah plugged in the dryer, the whole house was suddenly plunged into darkness. Frantically she groped her way from room to room, flipping every wall switch. Each time nothing happened. Everything was still dark. Very dark.

Sarah caught her breath. She knew she was okay and the house was still safe. But she began to imagine strange noises which seemed to persist no matter which room she stumbled into. And after banging her leg on the living room coffee table and running into her bedroom door, she concluded that the best place to await her parents’ return would be her closet. There would be one more door between her and… whatever.

After what seemed like an eternity, Sarah heard the front door open and the welcome sound of her mother’s voice. “Sarah? Where are you? What happened?”

She hugged her parents tightly and related the events of the evening. Her father dug a flashlight from the kitchen’s junk drawer and disappeared briefly into the basement. A few seconds later the house was again flooded with light. “A quick trip to the breaker box solved that problem,” he said with a reassuring smile.

Later, snuggled between her parents during family devotions, Sarah could smile at her fears. When her father read the Advent Scripture passage from Matthew 4, she sat up straight. “The people who were sitting in darkness saw a great Light, and to those who were sitting in the land and shadow of death, upon them a Light dawned.”

“I sure understand that better now,” she commented. “When I was waiting in that dark closet for you to come home, I felt like I was suffocating, almost as if I was going to die. Then you came home and turned on the lights, and I felt like I didn’t have to hide. I didn’t need to be scared any more.”

“That’s right,” returned her mother. “As Christians, during this season of Advent we look forward to the coming of Jesus, the Light of the world. We aren’t groping around in darkness any more, and we can celebrate that Light.”

Sarah heartily agreed. She had had quite enough of sitting in darkness!

You, who made a great nation of us
You blessed, and called us Your own
Your blessed children, the line of Abraham
Given promises, You have kept
We praise and delight in Your presence.
Amen.