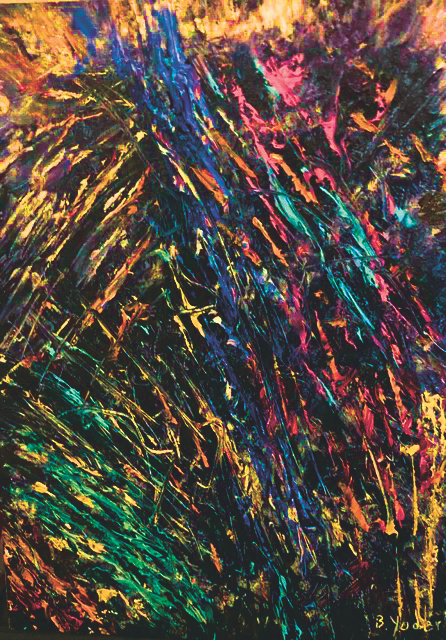 I remember the delicious feeling upon awakening on the morning of the Fourth. I wiggled my toes before throwing off the bedsheets in anticipation of what this glorious day would hold.

This was the Fourth of July! I would spend the day with my friends and fistfuls of firecrackers. Up and down my street, I could hear pops and snaps as neighbors lit their pyrotechnic devices, adding fuel to my excitement. When I was a child, fireworks were reserved for one day and one day only — the Fourth of July.  After that, they wouldn’t be used again for an entire year!  So we would furiously pack all the fun we could into this one resplendent day.

Later, as dusk settled on our little town, my family would pop corn and put it in a large grocery sack. We piled into our Chevy and headed out of town. Somewhere on a quiet country road, my dad would pull over and us kids would climb out and sit on the hood of the car pushing and shoving one another for a spot. With our eyes on the sky, we waited and wiggled as the bag of popcorn dwindled. Often the evening air lingered warm and humid, and sometimes bold streaks of lightening and rumbling rolls of thunder threatened to end our adventure and send us home disappointed.

Just about the time a few stars began to peek out, the first colorful blast appeared. And then another. And another. I didn’t want to blink as I might miss one. Some would shoot straight up before exploding in an ear-shattering fashion, while others whirled in an impressive spiral. Some shattered into thousands of red and blue sparks followed by others that tumbled like a crimson waterfall. But my overall favorites were the ones that shot up quickly and then floated into a quiet, glittering silver shower. And just as soon as I thought I had seen the best one yet, another appeared that exceeded it.

Finally, the sky became dark and quiet. Was it over? No. Soon the sky lit up in a dazzling, thunderous show of red, gold, blue, and silver. The Grand Finale! Over and over, blast after blast filled the sky with a display that cried out, “And the rocket’s red glare, the bombs bursting in air gave proof through the night that our flag was still there!”

As magnificent as the fireworks were on those memorable Independence Days, they cannot be compared to the Great and Terrible Day of the Lord yet to come. Children anticipate holidays much more than adults. Remaining childlike in our eagerness for Christ’s return keeps us close to His heart. After all, who do you think is looking forward to that day more than anyone? And those who are ready for His return look forward to this day more than any other day. But for those who are not prepared, it will be terrible.

Meditation: On this Fourth of July, consider your outlook concerning Jesus’ return. Does it excite you, terrify you, or do you feel ambivalent about it? How do feel about seeing His face? Do you want to get more out of your earthly life before He returns or are you ready now?

“And I will cause wonders in the heavens and on the earth— blood and fire and columns of smoke. The sun will become dark, and the moon will turn blood red before that great and terrible day of the Lord arrives” (Joel 2:30,31 NLT).

“For as the lightning flashes and lights up the sky from one end to the other, so it will be on the day when the Son of Man comes. But first the Son of Man must suffer terribly and be rejected by this generation (Luke 17:24,25 NLT).

“You also must be ready all the time, for the Son of Man will come when least expected” (Luke 12:40 NLT).

Prayer: Jesus, help me be ready to see You face-to-face. Fill me with wonder and anticipation of that Grand Finale when You return.

(Photo of painting by Barb Yoder. Color enhanced by editor.)