An Unplanned Visit to Tabor Chapel 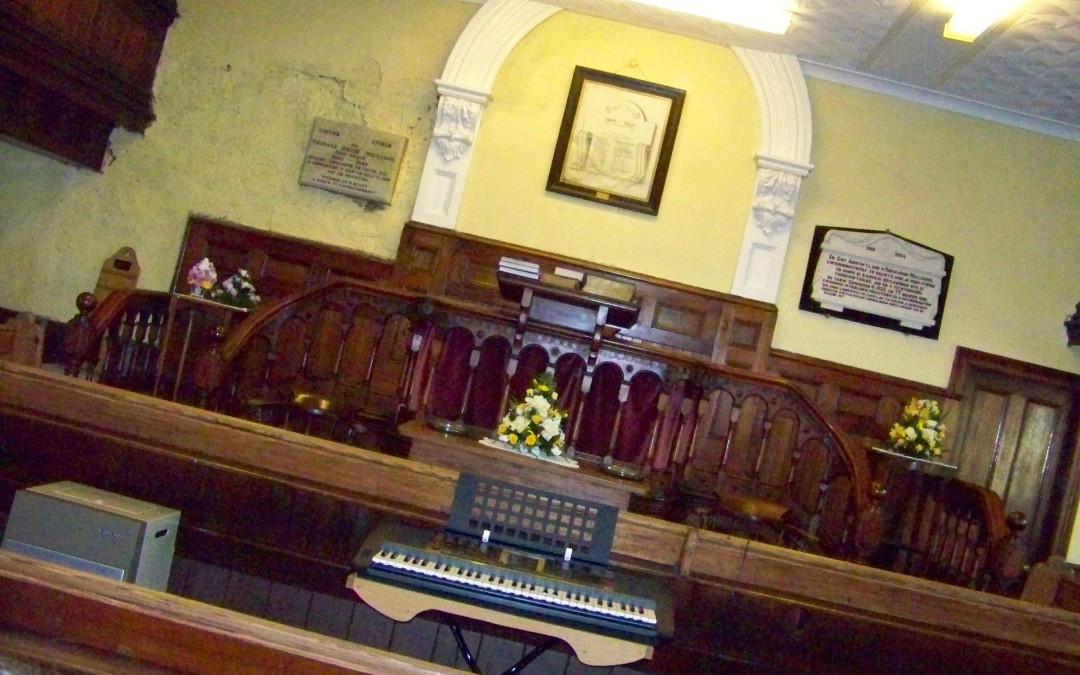 We were fortunate to have David Pike, a noted historian of the Welsh Revivals, as a tour guide for part of our trip.  He was a gold mine of knowledge as well as of the Holy Spirit!  He took us to what is commonly called “The Valleys” in South Wales.  These are where the mining communities were located during the days of coal mining.  Now that the coal mines have closed, many of these people live in relative poverty but absolute beauty, as this area is known as the “Swiss Alps of Wales.”

David wanted to take us to the chapel where he believed the love song of the Welsh Revival of 1904, “Here is Love,” was first sung.  On the way to this location, we drove through the quiet, charming village of Abergwynfi, one of the highest and most isolated of the one-time coal mining communities of South Wales.  David decided to stop and take a photo of a chapel we went by.  Getting out of his car, he saw a man standing in the doorway of a house and greeted him with, “Lovely day, isn’t it?  We are just stopping to take a photo of this chapel.”

The man replied, “Would you like to see it inside?  I am the caretaker of Tabor Chapel and have the keys.”

“Why, yes, we would love to see it,” David responded, and we all trooped inside.

Unexpectedly, this tall, tattooed gentleman of about 40 years of age began relaying the terrible tragedies of his life including the death from cancer of both his parents, who were strong members of this church.  Since then, he had attempted suicide three times, once with a Samurai sword.  As for himself, he was a believer but no longer attended the meetings.  Left alone in the family house, he just wanted to leave Abergwynfi and start over somewhere else.  No, he did not want us to pray for him, as the memories in this church were just too painful.  He nervously left the building but not before telling us, “You can play the organ, if you would like.”  Our team leader, Dave, began gently playing and singing, “Here is love, vast as the ocean…” as we all joined in, some of us weeping.

As we were singing, I looked up and saw three strangers, a man and two women probably in their 70’s, standing in the back of the church with the expression of awe, reverence, and joy all over their faces.  They stood quietly until we finished singing.  Then they introduced themselves as members of this congregation.  They had returned from a shopping trip, and the caretaker of the church approached them and said, “There are Americans in the chapel singing.  You should go in!”

We asked them how we could pray for their church.  They immediately responded, “Pray that the young people will come again.  There are only eight of us left, and we are all getting old.  Our pastor is 96 years old.”  We asked the youngest member of our team, Emma, to pray for this matter.  I encouraged Emma to not just pray but to call out for the children and youth to come.  She said, “Young people, come!  Children, come!”  At that very moment, while the words were still in her mouth, into the chapel walked a 16-year-old girl, a 6-year-old girl, and their mother.  Later, we found out that one of our team members, Pat, had been outside while we were singing and saw the girls playing in the street.  He encouraged them, “There is something special going on inside the chapel.  You should go check it out!”  They went to ask their mother, and she replied, “No, I am cooking right now.  I can’t come.”  Pat chuckled, “Well, turn the stove off.”  So she did and came with the girls.

We asked if we could pray for them.  They agreed.  Afterwards, we inquired if they would like to receive Christ as their Savior.  The girls declined at this time, but the mother said, “Yes!” choking back tears.  Emma led her in prayer.  Later, she told us she had attended the chapel as a little girl, her father was one of the eight remaining members, and her grandfather had at one time been its minister!

As for our caretaker friend, he stayed listening near the door of the chapel all the while this was happening.  He did not want to come in but couldn’t tear himself away.  One of the pastoral team members, Carolyn, had come out of the chapel to speak with him and minister to him.  It was clear that he had an encounter of His own with God, as he seemed noticeably more cheerful and open with us, and when it was finally time to leave, it appeared that he didn’t want us to go!  Secretly, as a team we prayed that this caretaker would someday become the new pastor of Tabor Chapel.

At the invitation of the three chapel members, we went across the street to Allen and Pauline’s home where we enjoyed tea and biscuits and fellowship in a proper Welsh way while enjoying a breathtaking scene of “The Swiss Alps of Wales” from their living room window!

“The mind of man plans his way, but the Lord directs his steps (Proverbs 16:9)” was fleshed out with us during this unplanned stop that turned into several hours.  None of this was on our agenda for the day, but it became apparent that God was telling a story and inviting us to be players in it!