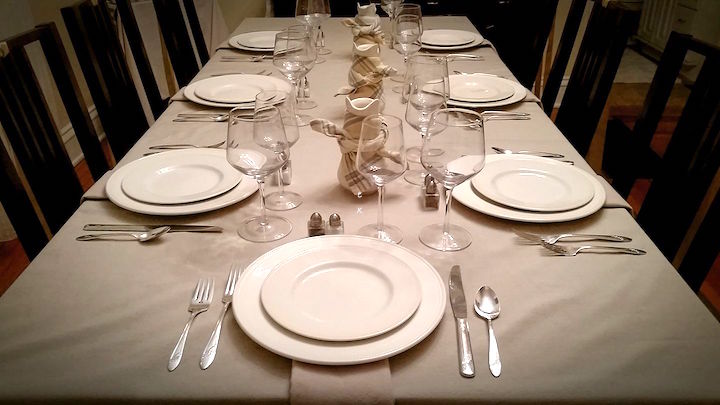 My hand instinctively swept over my lower left abdominal quadrant. “Oh, no,” I thought to myself. “Not now!” As the morning proceeded, the familiar, sharp pain increased. Soon I was doubled over and left the kitchen to recline in the living room. It was Thanksgiving Day, and we had guests. I was cooking the turkey and all the other traditional dishes, and the aroma was making me nauseous. Meal time was drawing near, and I knew I wasn’t going to be able to serve the food, let alone eat it.

I had a history of diverticulitis, and it would strike at the most unpredictable, inopportune times. Symptoms were severe abdominal pain and sometimes fever, nausea, and chills. Most times, I would need to treat it with antibiotics and a very limited diet. I announced to my family and guests what was happening and that they could still have Thanksgiving dinner, but I would not be able to eat with them. As soon as dinner was over, I would need to go to ER or urgent care for treatment since it was a holiday, and no doctors’ offices would be open. But first, I said, “Let’s pray and see if God heals me without treatment.”

Our guest, who was not a believer, asked me, “Does it ever work?” I relayed to him and the others the following story:

It was the middle of the night. I had been sleeping but was jolted awake with left abdominal pain and chills. Larry was working nights so I was alone. I recognized the pain as diverticulitis, an old nemesis that raised its ugly head from time to time. But why now?! Our annual women’s retreat was just two days away, and I was leading it. Typically, the pain lasted a few days before it dissipated with antibiotic treatment. “Oh, God, I need You,” I cried out. “Please heal me.”

Tula, our cat, was sleeping beside me on the pillow next to my head. Suddenly, she shot into the air and landed back down on the pillow. “What was that?” I laughed. I placed my hand on Tula, and she seemed okay. But what had spooked her? Then I realized that the abdominal pain and shaking chills had abruptly ceased. I pressed around the area, trying to elicit the pain…but it was gone! “Had God sent an angel to heal me?” I wondered. “Did our cat sense the presence of someone in the room?” In the morning, I checked myself again. Still no pain. I was amazed and thankful that I was able to attend the women’s retreat with no problem!

“Would God do it again?” our friend inquired.

“Well, to be honest, most times I need to go to the doctor,” I replied, “but I always ask for healing first. Let’s see what happens.” As an afterthought, I added, “All healing comes from Him, whether instantaneous or through medical means.” I wanted so badly to be instantly free of the pain so our friend would see God’s mercy at work, but mentally I was preparing for an ER visit.

Pulling together, everyone placed the meal on the serving counter. We joined hands and prayed a short, simple prayer of thanksgiving with a request for healing. The guests sat down and began to enjoy the dinner. Surprisingly, within minutes the pain left and my appetite returned. “Hey, guys, I’m feeling better! I think I can join you at the table.” I sat down and devoured mashed potatoes, turkey, and stuffing. I even had pecan pie later.

Prior to that unforgettable Thanksgiving, regular diverticulitis attacks had been the norm for me, typically two or three times a year. But to this day, I have never had another one. More importantly, my family and guests saw God’s hand of healing in a most dramatic way!